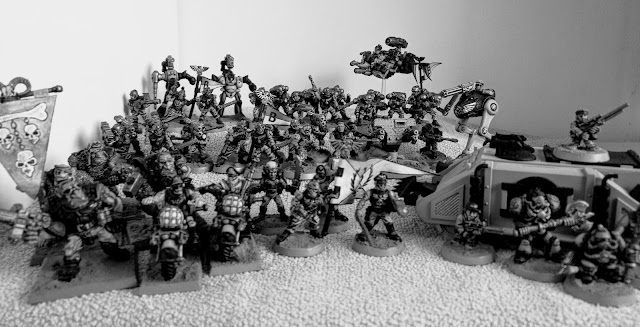 This is the Bravo company of 114th Salihanian Infantry Regiment originating from Salihani IV that is the only inhabited planet of Salihani system. Rediscovered and pacified a few centuries ago Salihani IV has been used to raise regiments to Imperial Guard for nearly two hundred years now. For first few decades it was a regiment every second or third year but now a days Salihani IV produces a full regiment annually.

Inhabitants of Salihani IV are mostly farmers and nomads who live in large family groups that form clans and tribes led by local chiefs/warlords. Hostilities between clans or tribes are common. As long as the large scale balance in the area is not jeopardized the Imperium lets the tribes do their small scale warring. In case some warlord gets too powerful and starts to threaten the Imperial rule the response is quick and violent. Normally the Imperial troops and administration is present only in the few larger cities and the area outside cities is controlled by the tribes.

Salihani IV is relatively underdeveloped compared to many better known Imperial worlds. Firearms have mostly replaced the traditional bows, spears and swords but the guns are usually simple stubguns or even muskets. Poor maintenance of weapons and other equipment is common among the tribes. In combat tribal warriors are usually indiciplined and confrontations are rarely desicive. Only when one side hugely outnumbers the other will something else than wild firefight with small casualties happen.

When rediscovered the salihanian worshipped the Moon God and some local minor deities. After the pacification campaing the comissariat had a relatively easy task of integrating the worship of Moon God as a part of the Imperial Cult. Almost all salihanians now bow to the Moon emperor who is presented as a harsh deity demanding unconditional obedience. And to whom one can best show his obedience by showing courage in the field of battle.

Regiments raised from Salihani usually have members of a single tribe in a company. This is to reduce tensions in unit but it also allows for the officers to promote competitons between the companies. Officers and almost all NCOs come from other Imperial systems. Tribal salihanians are very rarely promoted beyond the rank of a lance corporal. Discipline in the salihanian regiments is really harsh and a self-willed guarsman will very quickly found himself transferred to a penal batallion.

Because of the technical underdevelopment most salihanian regiments are infantry heavy. The simple las gun is the common trooper´s tool as it requires very little skill to use and is almost maintenance free. The more advanced systems and the rare vehicles are used by adeptus mechanicus personnel or specialist guardsmen from other systems. Abhumans are quite commonly used to boost combat value of salihanian units.

The guardsmen of "Bravo" company belong to Shamalii tribe that lives in the northern plains of Salihani. Shamaliis are nomad that move with herds in wide areas. Harsh desert environment has hardened these men to endure in such conditions where most would hard it hard to survive. Despite the large area inhabited by the Shamalii they are infact one of the smallest tribes of Salihani. As it happens "Bravo" is the only Shamalii unit in the 112th. Because of their nomad background, "Bravo" is often used for reconnaisance and patrolling duties.

112th is at the moment on Nitram II, a desert planed that was hit by a serious Ork invasion. Ork were able to take hold of two mines producing metals for Imperium´s weapon industry. Local Planetary Defence Force was unable to to contain the invasion and as it seemed that the whole planet might fall IG regiments were sent in.  At Nitam II "Bravo" company distinguished itself in the Battle of Adzira crater where it´s tenacious defence prevented the greenskin reinforcement to join the orsk surrounded in the crater area.

After the Battle of Adzira crater "Bravo" is roughly at 2/3 of it´s original strenght. The originally three squad strong tactical platoons noth have just two squads and the assault platoon whose brave action prevented the greenskin breakthrough is down to single squad and command section. With no manpower to replace the losses "Bravo" has been reinforced with abhumans and admech components to keep uo it´s combat value. Though battered "Bravo" is in a lot better shape than regiment´s Janubii tribe companies Charlie, Delta and Echo that were almost wiped out in the final bloody assault to Adzira.

Now located at Brander area with the rest of the regiment "Bravo" is tasked once again with patrolling. They are to find the surviving Ork units that were able to retreat from Adzira after the battle. 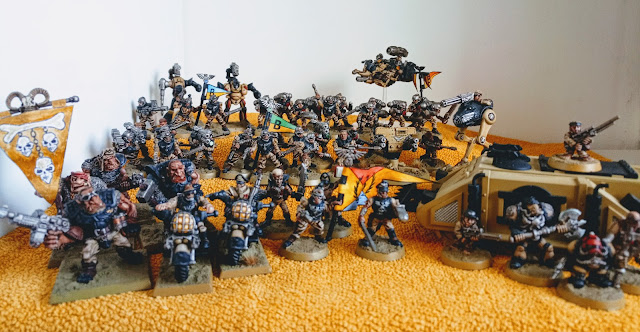 The same picture but in color. This is roughly one third of the models I have painted for this company. There was no way I could fit them all in on photo. Front from left to right: ogryns, company commander and head commissar on bikes, company banner and 2nd in command, rhino, ratlings and adeptus mechanicus detachment.
In the middle 2nd tactival (green) platoon, tarantula and sentinel.
Back: Parts of 1st tactical paltoon (blue), robots, parts of assault platoon (red), land speeder.
Lähettänyt VonKortez klo 6.05