General, army standard and a gobbo

The year of slow painting and blogging continues. Due to real life responsibilities and over all laziness the following three models are all that I´ve finished since the last posting. But again they all are important additions to my slowly growing green skin army. 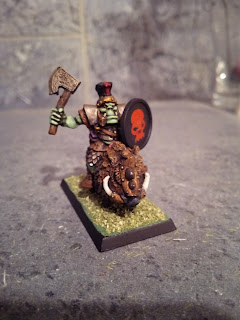 First off is this Marauder MM22/6 Orc General on Armored Boar. He will get to be the general of my army and eventually he´ll have a band of gruntas as his personal unit of bodyguards. 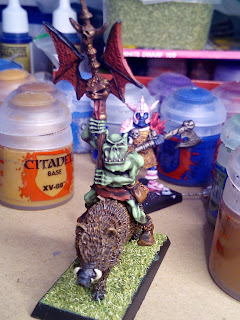 So far I haven´t had a army standard bearer for green skins but this old boar boy will remedy that. A lovely model and very different in style compared to the Marauder general. The dull red color of the standard and his loin cloth will serve as the unifying element for the gruntas unit that will follow in the future. I´ve installed small magnets to both the boar and the rider so that they can be easily taken apart for transfer.

And then there´s that freebie evil warrior I got a couple of weeks ago. Trying to get a slaaneshian look on him but not sure if I´m going in the right direction. We´ll see. 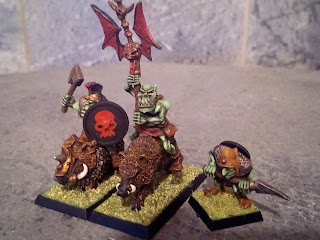 As last here are both the general and the standard beare with the gobbo n:o 32. Gobbos are now a pretty good sized unit but as I have two more model waiting I think I need to aim for at least 36. A 6x6 block would look good on the battle field. Or maybe 40 is good number. Don´t know. The more the merrier? Just love those little chaps. Fast to paint and their sculpts are full of character.