Just a quick update on my dark elf war altar project. I haven´t have much time to paint lately but I´ve managed to complete the altar piece. My vision was of an idol of a demon or some dark god fastened on a crude platform. I imagined the religious fanatics chopping off a part of a larger statue to be carried around in the battle field. 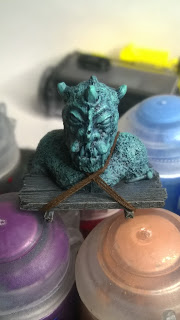 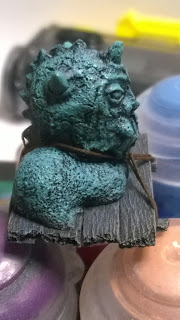 The platform is made of some 6mm wide lolly stick that were cut to roughly same lenght. Sticks were glued together and painted black. Then I highlighted them with various shades of gray. I added a bit of blue to the mix and last higlight were drybrushed with very light gray. 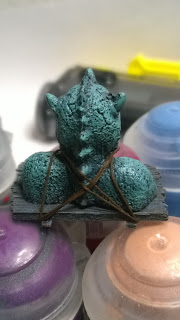 The rope is just a piece of cord I dug out from wifey´s sewing stuff box. It´s color was a bit too light for my liking so I gave it a wash of agrax earthshade. Still thinking about giving it another wash and perhaps a light drybrush after that.
Lähettänyt VonKortez klo 11.10 Ei kommentteja:

A couple of months ago a saw this thread in the Oldhammer Forum and knew I have to make an altar for the joint effort dark elves. There is not a set for a war altar and as Willmark points out there are not that many models around that could be used as altar guards.

I did not want to copy what Willmark had done but tried to find an another angle of approach to the subject. In the end I was sort of forced to use the same two witch elf models Willmark used. To get some differences from his desing I´m using four altar guard who will carry an idol of some dark god and a banner bearer. 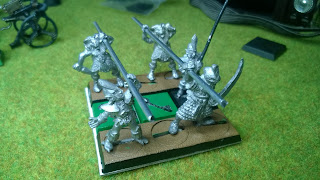 Here are the five altar guard. In the front a slighly conversed repeating bolt thrower loader. He may get a weapon to his right hand eventually. Tha other one is a Marauder dark elf warrior who´s shield hand has been drilled. In the back there are two witch elves who have had one of their daggers removed. The one to the right had her right hand repositioned so that she can hold the altar at the level as all the other do. The banner bearer is another bolt thrower loader. The bolt bundle he was holding has been replaced with a lance from a 5th edition cold one knight. 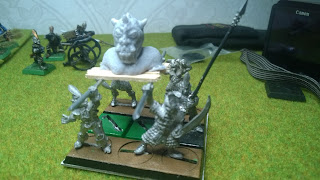 The idol is some sort of demon bust set on a crude plank panel. I´m going to add some ropes or chains to make it look like as if the idol had been tied down to the panel. Some bits and pieces will propably be added too. I imagine painting the idol bronzed with some blood stains or something. The idol is quite large but hey - these elves are religious fanatics. 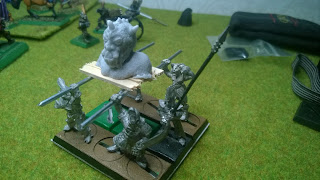 Following Willmark´s example I used the three man 20x50 bases for the altar guards. That way and by partly clipping some of the slotta tabs I was able to set the guards in pretty straight lines. The carrying poles need to be shortened a bit before base coating as they look a bit to long for my taste now. As per WFB: Armies book the artar guards don´t get shields but I might give the stardard bearer one to cover my crudeish conversion job.

Bolter and a farmhouse

A repeating bolt thrower for Traject0ry´s joint effort dark elf army got completed a couple of days ago. The warmachine itself and the crew are all nice models and were a joy to paint. I especially like the body builder spotter. The color theme is dark brown and grey which I think suits the dark elves well. 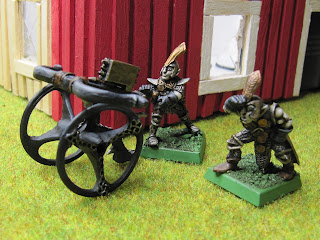 Spotter, aimer and the bolt thrower. I still might put the warmachine on a 40x40 base but don´t have any at the moment. 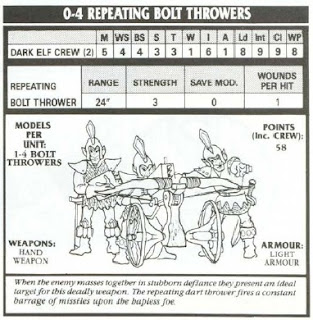 Goblin Lee has extensively anayzed the pros and cons of a repeating bolt thrower here. It´s not a very effective warmachine actually. It´s not very good value for money if you look at it points vise. But it´s a nice addition to a narrative battle where the points value is not the most important factor. And as Lee points out - it´s a nice model.

You propably noticed the mostly red and white building behind the elves in the first picture. It´s a WIP scratch build farm house I´ve been slowly working on for about a week now. My daughter got a set of headphones for Christmas and the box they came in was of very sturdy card board. I got an idea and without much planning I cut the box to something that resebled a house. From my daughters handicrafts box I found a big bag of 6mm lolly sticks and so I started cutting and glueing them. The walls and windows are now ready to be painted and some parts have received the first layer. The roof is in making and will be removable to allow putting models inside. 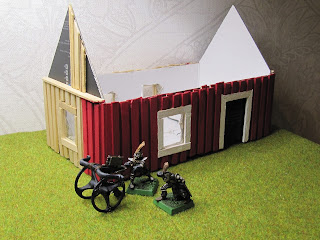 Front side of the farm house. The door needs to be done. And the roof end triangle. And of course it all needs to be painted. 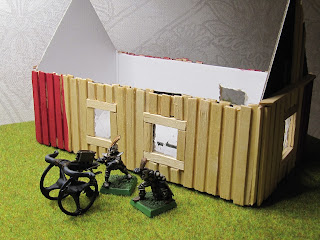 Back side. Two windows here. It doesn´t show well in the pictures but I used gelatin sheet for glass.

I´m not sure if the scale is correct. I simply used an orc as a measuring stick for the door and windows. I still need to decice what to do with the interior. Might just add window frames and paint everything in some light color. But I propably will not be adding furniture and such. At least that´s not in my mind now. I´ll propably mount the whole thing on a base of some sort and add barrels, cart wheels and other small stuff. But let´s complete the house itself first.
Lähettänyt VonKortez klo 10.41 Ei kommentteja:

Tiny man from the ocean


“Then a man arose from ocean,
From the waves a hero started;
Not the hugest of the hugest,
Nor the smallest of the smallest;
As a man´s thumb was his stature,
Lofty as the span of a woman.

The very first entry to Kalevala painting challenge is this tiny man from the sea by TL. I´m yet to receive the model but was mailed the first two pictures of him. Not sure what the model is but by the looks of it I think it is 15mm dwarf. Have to confirm the manufacturer and other facts at some stage. Better pictures will be made available when I get the figurine. Väinämöinen´s sowing is a part of the world creation story in Finnish national epic Kalevala. In this poem Väinämöinen who is a powerfull shaman summons Sampsa Pellervoinen the architect of the forests to sow the land with trees. He sows many trees and in time they grow and flourish; however, the oak will not grow.

The water giant Iku-Turso then rises and burns a haystack and in the ashes he plants an acorn and it begins to grow. It grows taller than any other tree in the land, growing up to heaven and blocking out the sun and moon. Väinämöinen calls the Water-mother to send him someone who can fell the great tree. Presently a man appears from the water, clad in copper from head to toe, a man no taller than a man's thumb.

Väinämöinen mocks the man, but the man grows so large his head in among the clouds. He swings his great copper axe and the great oak is felled on the third stroke. (Wikipedia) 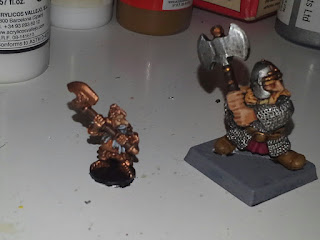 A size comparison between the tiny man and a 28mm dwarf.