I definately wanted to have an imperial robot in my Oldhammer IG force. And finally got one for reasonable price at ebay. Then opportunity presented itself and I was a chance to do a little swap that resulted in getting a squat adeptus mechanicus. Thank you The Composer! What a nice pair these two make. 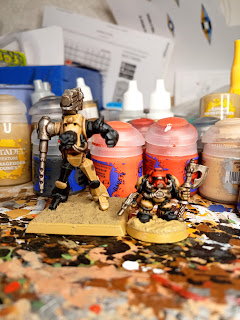 Conqueror class anti armor robot. Heavy bolter, assault cannon and power fist. Adeptus mechanicus squat with power axe and las pistol. His helmet is red as he is after all an abhuman. His presence in the company  is tolerated by the Commissars for he is the only one who can keep the robot in condition. 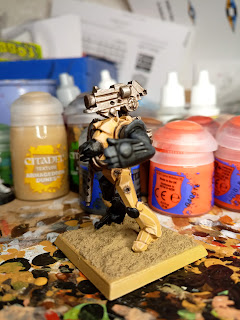 Painted some battle damage to the left leg of the robot. There´s another hole like
that on the right leg. Not sure what they are but used this one to make it look like
he´d been hit by something. 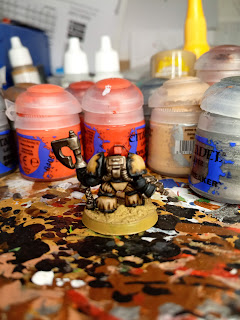 Squat tech priest from behind to show that detail on his power armor. 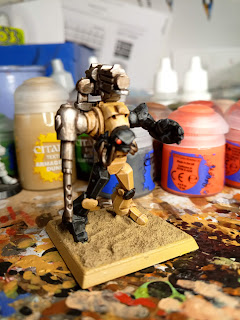 A better shot of the big assault cannon and ´facial´ details of the Conqueror.

B Company is slowly yet steadily growing and needed some officers to it´s ranks. Both 2nd tactical platoon and assault platoon were missing a platoon leader and the company itself a commander. This week those positions got filled. 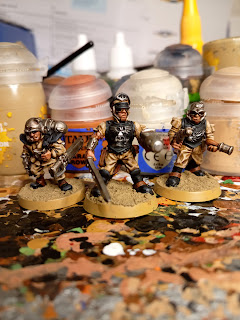 In the middle is the company commander major Rosenzveig. To his left stands 2nd lieutenant Matula, leader of the 2nd tactical platoon. And on Rosenzveig´s other side is 1st lieutenant Geeing from assault platoon. 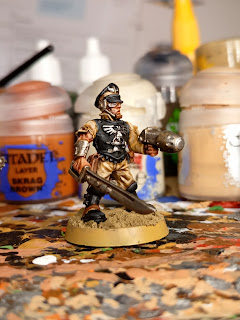 Majot Rosenzveig carries a big plasma pistol and a sword. He is a pretty commanding figure with that torn sleeve and metal arm band. 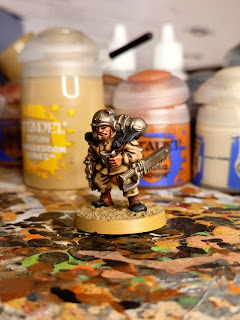 1st lieutenant Geering has chosen not to wear that metal brest plate the officers usually have in favor of better mobility. His model is actually that of an imperial commander but I did a bit of kit bashing giving him a chain sword and a jump pack. As mentioned he will be the leader of the assault platoon. 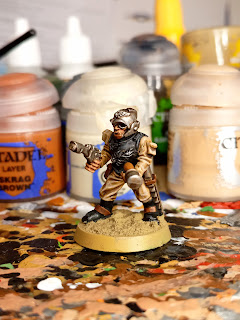 And this is 2nd lieutenant Matula, leader of the 2nd tactical platoon. A minor kit bash again. I gave him a stick grenade. It´s a bit large perhaps but I don´t mind.

Slowly working on the troopers of the 2nd tactical platoon. Will need to assemble some plastic guardsmen next.

I think it´s been almost two years since my previous game of 3rd edition WFB. My usual opponents live half way across the country and things like work have prevented me from traveling there. Luckily I found a new oldhammer enthuastic via forums and facebook groups with whom we found time to play last week.

It was Orcs & Goblins vs Dwarfs, 2000 points of each side and pitched battle. Here´s some pictures and a shortish battle report about that game. 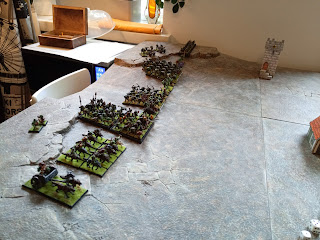 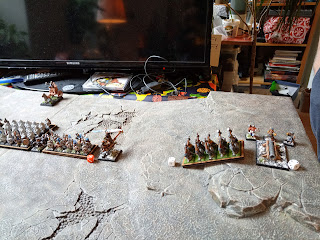 The dwarfs left flank facing my goblins. Three dwarf cannon, hammerers, gyrocopter, iron breakers, flame thrower and quarrelers. My intention was to engage the elite dwarfs with my gobbos to keep them away from my main orc unit and trolls. I possible I would try to get the cannon with goblin chariot. 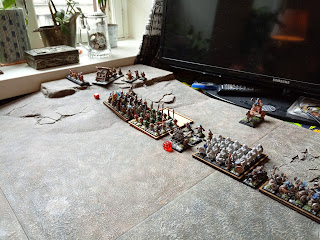 Rest of the dwarfs. Next to quarrelers a three barrel organ gun. Then pike armed dwarf warriors, another unit of dwarf warriors, bolt thrower, stone thrower and a small unit of slayers. I planned on engaging the warrior units with my orcs and then trying to break them with trolls. 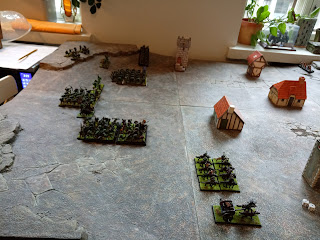 My battle plan started to fall apart right from the beginnig as both troll duos decided to pick some flowers instead of advancing. And orc arrers fell victim to animosity and did not move. We played on a longish board with some distance between the armies and I knew my green skins would suffer greatly from those dwarf war machines. 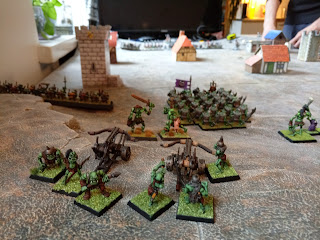 Green skins advance. Well - most of them. Trolls are mingling around as they did for most of the first four rounds. 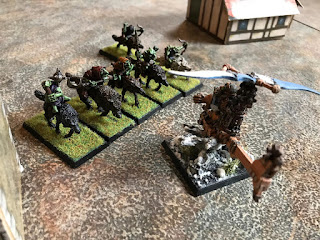 The wolf riders were the first to suffer casualties. Hit by a cannon they lost four goblins and had to roll for panic. That roll was suprisingly passed. They tried to retaliate by shooting at the gyrocopter but failed to hurt the pilot despite hitting him twice. 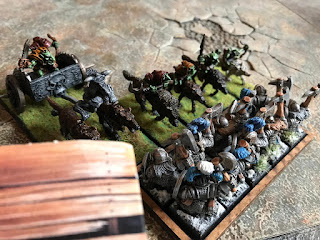 To slow down the elite dwarfs on that flank as planned (and not get shot to pieces) wolf riders and chariot charged the iron breakers. They would hopefully buy some time for my better troops to break the dwarf warriors. 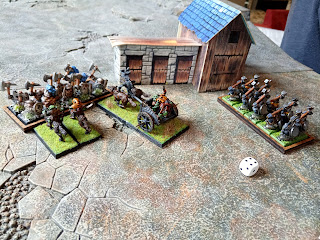 As expected the goblin were suffering at the hands of the iron breakers and now were in danger of being flanked by the hammerers too. But they had slowed those two units conciderably now. 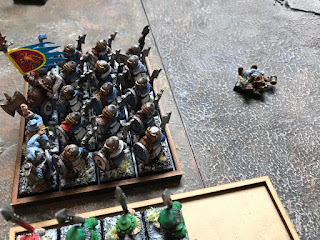 The dwarfs finally lost something as a warrior was impaled by a bolt thrower bolt. 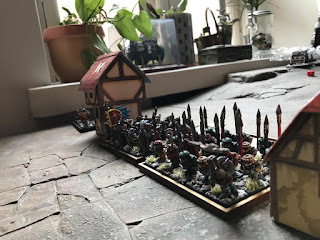 The dwarf center advenced in good order and found good positions between two houses. They would not be flanked. 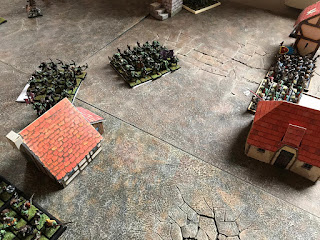 My orc line on the other hand was quite a mess. The boyz were blocking arrers advance and all the trolls were doing trollish things still at their deployment area. At top of the picture goblin arrers are sqeezing past the tower and prepare to shoot at slayer they are facing. Gobbo horde at the bottom moves forward behind the wolf riders and the chariot to forther block the dwarfs left flank. 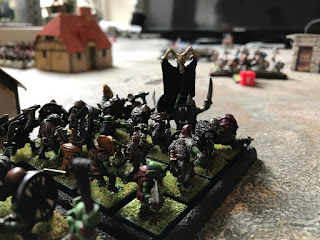 Gobbos can see their wolf riding brethren being slaughtered in the distance. 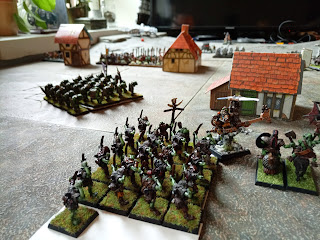 Gyrocopter is heading for the orc bolt throwers and flying over orc arrers bombs them with a grenade killing several. 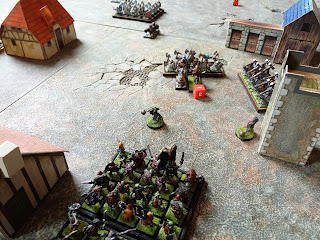 On O&G right the lone wolf rider hero is still finghting with the iron breakers when the gobbos close in releasing two fanatics. They move just five and three inches each falling short of their targets. In the next dwarfs round on is pin cushioned with cross bow bolts and in my next round the other rolls doubles and collapses. 60 points well spent. And with clear line of sight the organ gun released it´s barrels at gobbos who suffered roughly dozen casualties but held. 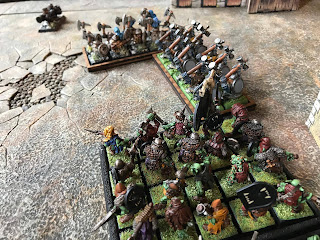 The gobbos bravely charged the hammeres in their flank. As iron breakers were jammed behind them it looked like my plan of holding the elite just might work. 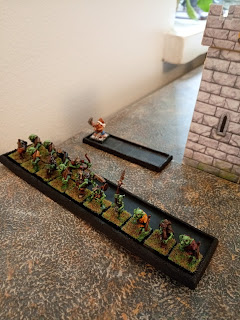 On the other side of the battle field a fanatic and arrows killed all but one of the slayers. But that slayer charged the gobbos and eventually single handedly routed them. 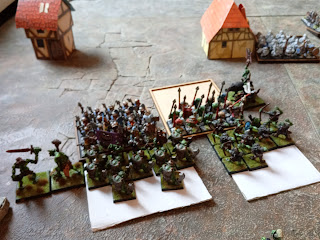 The centers engaged but despite even trolls finally joining in the orcs were unable to break the darfs warrior units. As the last effort orc general himself joined in but it was too little too late. More dwarfs from their left flank (righ top in this pic) were closing in for charge. At this point I saw no hope of victory and congratulated my opponent.

As I had a day off work and not many things to take care of I took some time to finish 1st assault squad. The first model was painted months ago but as I did not have back packs and chain swords to move forward with this project I had to wait until I got some from ebay. To be able to use this squad I need to have a command section with jump packs too so that they will form a single squad assault platoon eventually. I don´t think I have the interest or resurces to expand the platoon to two squad or bigger. For instance the plasma gun troopers are hard to get and pretty expensive models. 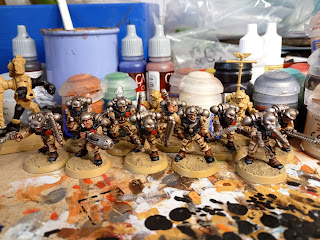 The assault platoon´s color will be red. You can see their command section´s standard bearer in the back ground. Sergeant, two plasma gun troopers and seven troopers with las pistol and chain sword. 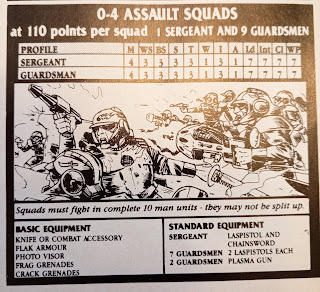 The normal armament for troopers is two las pistols but those can be replaced with chain swords, hand flamers or bolt pistols. As my supply of las pistols in not endless it was quite easy to go with the chain sword alternative. Those are modern Cadian chain swords that I used btw. 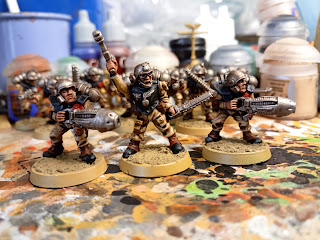 Sergeant and the two plasma gunners. As mentioned before those plasma guns are huge. Jumping with them should be something of an occupational hazard. Not to mention plasma´s tendency to overheat on sustained fire. 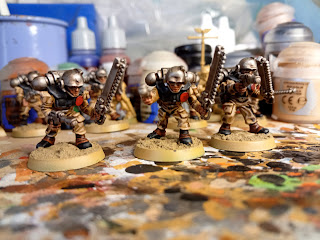 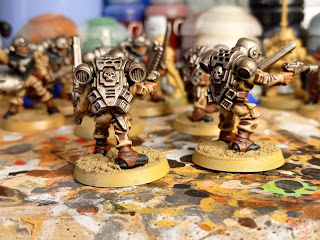 In my opinion the plastic marine back packs work quite nicely as IG jump backs. I have no idea from which edition the packs are and to be honest don´t care.