As my previous blog entry was a Guest display I felt that it´s sort of must to show something done by myself now. I´ve been wanting to create this unit for a long time as I really wanted to have halberd armed elven guard. I´ve used these great Jes Goodwin models as my guard previously but they are obviously not WYSIWYG for halberd and heavy armor that I want my guard unit to have.

Black Tree Design Royal elven guard filled that need. I´ve had these models for a while now but was distracted with painting green skins until now. I really like the line - there are six different rank & file models and a full command. So a lot of variety. Sculpts are nicely detailed and well cast. 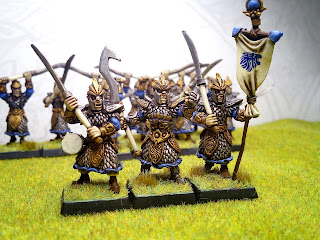 The command group. The musician is perhaps my favorite
sculpt of the line with the drum hanging on to his side. 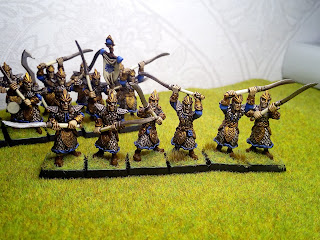 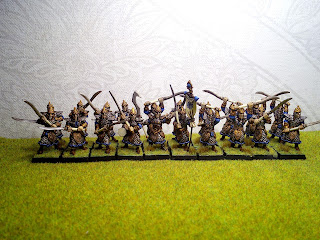 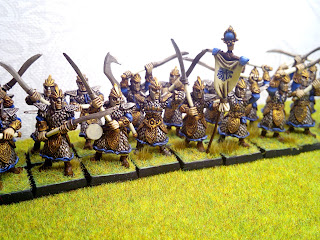 A closer look at the front rank. 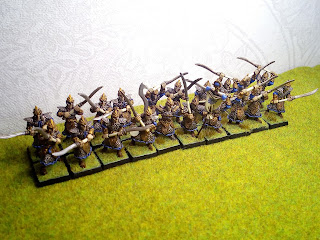 A bird´s eye view on the unit.

As it happens I have a couple of friends with nice Oldhammer armies or soon to be an army projects. However these guys are not into blogging and I felt that it´s a shame if their work does not get wider attention. Therefore I´ve started a new series of articles under the headline Guest display. In these articles I will present the works of my friends in a somewhat irregular schedule.

First up is Raaka-Arska with his growing old school dwarf army. Let´s hear it from Arska himself.

I have dreamed for a long time about creating a full army for good old Warhammer third edition. All that with principle that army must have a lot of character and ton of heavy metal from the 80s. Now that work has started with characterful Dwarf warhost and it has been a blast!

From the experience I knew that planning a project properly really pays off so I started by writing 1000 point army list. Rulebook and Warhammer Armies book serve as inspiration to this project along awesome blogs like this.

Most important inspiration for the project is still Wayne Englands legendary Dwarf army which was presented in the White Dwarf #135. Stylish and unique look with steel, blue and white all used in harmony. All this led me to first important decision right away, should I go with original 80's look on bases with simple flock and Goblin Green or something bit more modern?

I decided to go with bit more modern look but still keep bases simple and make sure they won't take too much attention from the main thing, miniatures. Snow is really powerful element and easy to add but I had never used it on bases, even after all these years, so that was set. Basic grey, few plants, and lots of snow. I also wanted to keep regiments and heroes on same low level so no hero will pose well, heroically on big rock or anything like that.

In practice those can be halved on small games but I will keep limits on my mind anyway. Then there is always Baggage Train to add (Bugmans cart, smith and his tools of trade or even juggernaut).

1 x Three man Stone Thrower
(this will be Goblobber but I while I am by no means powergamer I just cannot make myself to pay 25 points to downgrade Stone Thrower for worse.)

Bugman's cart is going to be on high priority to paint and do it's magic as unit filler first and as Baggage Train later. I also need unit of Warriors but one big unit of troops will be enough now. I would love to add Wizard to army at some point just because in 3rd edition I can!

This is the first post from me as guest and hopefully it inspires other to paint some dwarfs.

And here are the pictures. Comments by VK. 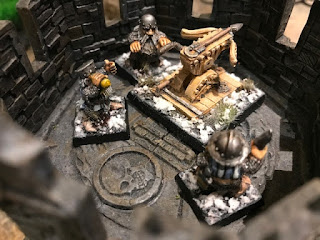 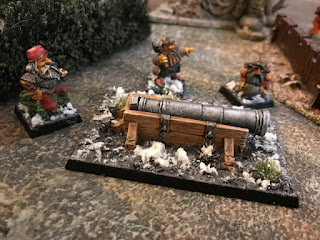 Who cares if gunpowder is explosive - I´ll smoke my pipe
where ever I want to. Really like the cool commander. 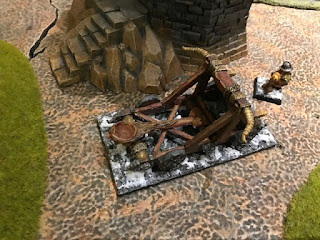 A goblobber with a single crew member. 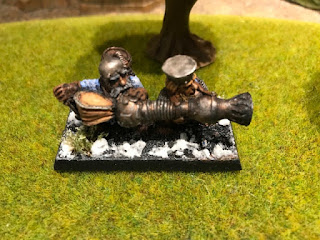 Another dwarfy machine of destruction - the flame thrower. 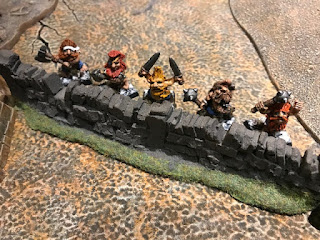 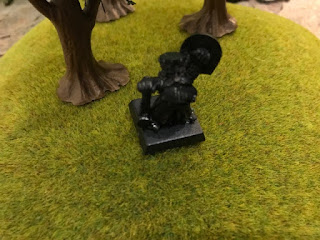 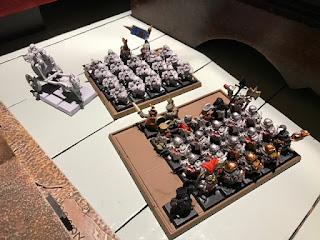 Dragon company, Bugman´s rangers and the cart waiting to be painted.

On 28th october the very first (as fas as I know) Oldhammer meet in Finland was organized in Oulu. I as the main organizer want to give a BIG thank you to Fantasiapelit Oulu for letting us use their gaming room. I also want to thank guys from ORLY for participating and giving the painting instruction/lesson. I picked up a few techniques I´m going to try out in the future.

As I had no previous experience on organizing a gaming event I didn´t have very ambitious goals for this meet. All the games were arranged by people I know and we were not expecting a big crowd. We tried to keep all the games and scenarios small and fast so that anyone could step in and play for some 30-60 min.

First scenarios started around 11am and we finished around 5pm although some of the guys stayed a bit longer to test a couple of games. I´m hoping to get a new meet arranged during this winter but we´ll see.

Enjoy the pictures. Wish I had taken more pics. But I was either busy GM:ing or playing so I kind of forgot to do that... 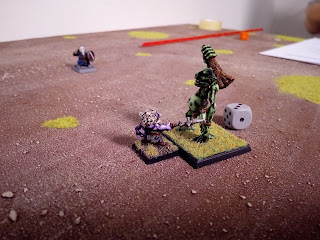 In the spirit of true sportsmanship  even a chaos dwarf was accepted
to participate in the troll slaying event. 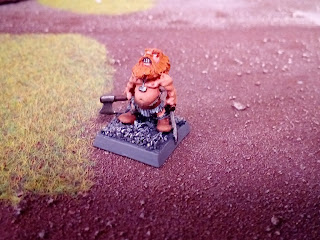 The troll slaying champion. In the end it was a slayer with
his frenzy and two hand weapons who came through as the top dog. 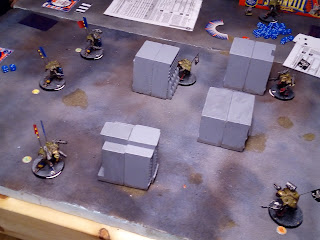 LM brought his titans and buildings along and ran a 3 vs 3 scenario in the meet. 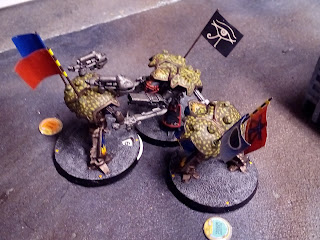 Two loyalist titans do hand to hand combat with
a single traitor. This one ended with a reactor meltdown
that took out two titans. 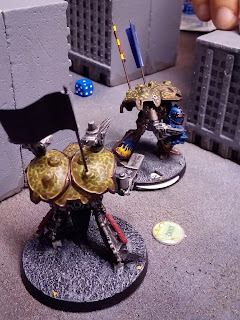 Four down, two left. A heavy traitor titans took out
the light loyalist titan without breaking a sweat. 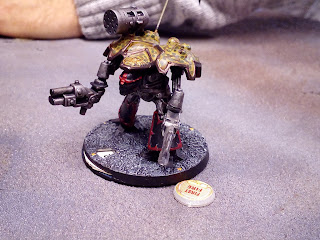 A close shot on one of LM´s traitor titans. 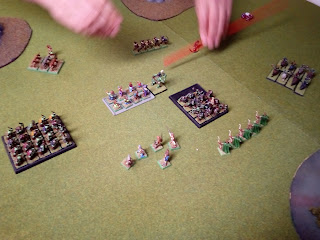 Goblins are moving through a valley with their prisoners as the
elves attack trying to free their brothers and sisters. The advance force
of eight wolfboyz has just returned to field. They will charge and take out
the green robed elf scouts. 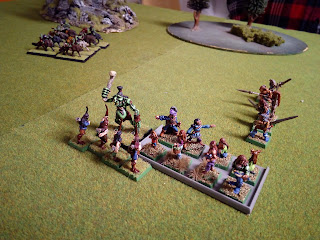 Wardancers break the gobbos leading the column but
are in danger of being charged by the wolfboyz.
Archers are fighting the troll to free the prisoners. 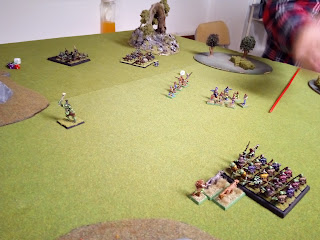 Troll manages to rout the archers and hacks them down but
the prisoners are left with no guard and flee. A brave beatmaster
and his warhounds tie down gobbo stickas. 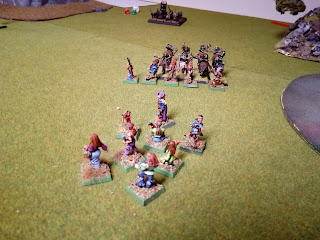 Elven civilians head for safety as wardancers engage the wolfboyz.
Routing gobbos can be seen on the back ground. 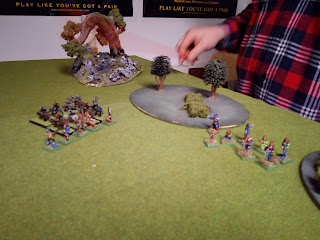 Using their special ability to avoid being hit the wardancers give
civilians enought time to get away from their captors.
The elves win but at very high cost. 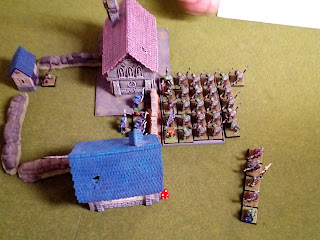 In another WFB scenario led by me a small garrison of elves was
defending a strong hold agains a far bigger orc force. I was expecting
a fighting withdrawal as elves had a prisoner they should have escorted to safety.
In the end the elves failed to do that and were pretty much slaughtered.