There it is: 390 points worth of trolls. As I mentioned in one of my earlier postings my trolls have fared terribly in the games they have been in. Twice routed with no wounds caused to enemy. But the biggest unit of them so far used has been only three strong. I concluded that the reason for their abysmal performance is that I just haven´t fielded enough of them. Now their numbers are doubled - what could possibly go wrong?!?! 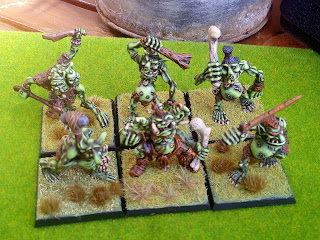 Mixture of pre-slotta Citadel and newer Marauder models most of these have been presented here earlier. The new guy is that C20 Skuttlescree Soresmeer in front row left. 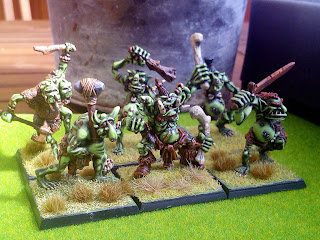 Ran out of the flock I used for 5/6 but being lazy I´ll just go with this different shade. It´s close enough and won´t affect their effectivenes on battle field. 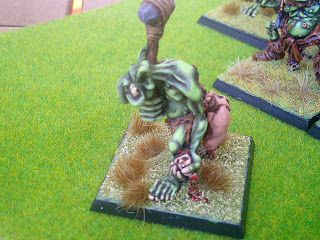 A couple of nice details from Skuttlescree Soresmeer: a severed head and something little for snack.
Lähettänyt VonKortez klo 4.23 Ei kommentteja:

Oh my! It´s been almost a month from my last posting. I must have been a lazy painter/writer or pretty occupied elsewhere. In truth the RL was quite hectic through the whole may with Finnish baseball season starting (my son plays that) and my job taking it´s time too.

Something has gotten painted despite being preoccupied with other duties. I got a couple of animal handler boars and a new handler for them. 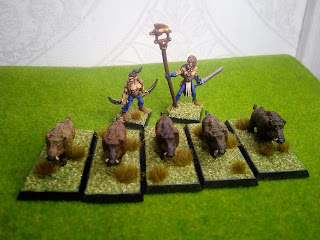 So now the unit stands at two handlers and five boars. Desperately looking for at least three more hogs make it a more usable fighting force. Anyone willing to help? 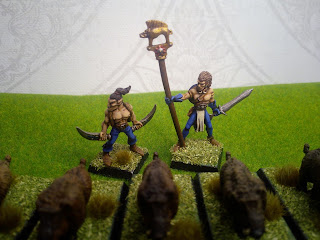 The handler with standard is a Grenadier Elf standard bearer. Very much in style with the Jes Goodwin sculpted Citadel one. And who says a animal handler unit can´t have a standard? 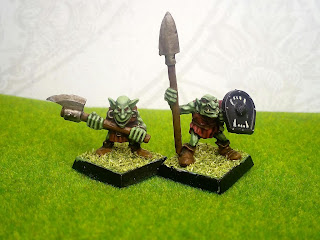 My previous posting was about my growing goblin horde. At that time they were two short of 40 but no more. I thought I had ran out of gobbos to paint only to discover not one but three of the spear armed Iron Claw ones and that I think 90´s axe wielder. He´ll fit in even if he´s not that oldhammer. I might not keep the duplicate Iron Claw gobbos so if anyones wants to trade for gobbos or elf boars please take contact.

It´s going to be a busy summer but I will publish something more during june I promise. I´ve returned to painting high elves BTW. Creating one of those units I don´t have yet in my army.
Lähettänyt VonKortez klo 22.34 Ei kommentteja: