When I was in the 9th grade I joined an american football team and ended up playing for 11 seasons all  the way from juniors to men´s team in Finnish championship league. Around the same time as started playing american football I discovered the White Dwarf magazine. The very first issue of WD I read back then was #101 I think. For obvious reasons I soon fell in love with Blood Bowl and 2nd edition was propably the first GW game I ever played. And I played it a LOT back in the days.

My general liking of Jes Goodwin sculpts began with these blood bowl elves. In my opinion these are still by far the best elf players GW has ever released. But I have have to admit that I do like the Dark elves of the same era a lot too.

It was always my dream to have a complete and painted elf team but the young me never had the resources or painting skills to achieve that goal. So I ended up playing with those not-so-gorgeous monopose elves from the Dungeonbowl set. A few of those got painted and I did buy a single blister of metal players and remember painting a thrower and a lineman but those have not survived to see this day.

Almost 30 years after discovering these elves I´ve finally reached the point where I can say that I have a painted playable elf blood bowl team. There´s a fair amount of good luck involved as I was not actively looking for these models. As it happened I scored a job lot that included among other things 8 elf players and that gave me the boost I needed to make this happen.

I painted the 11 models seen here in the same blue and white theme as my high/sea elf army. I tried to achieve a uniform look but so that there would be no two models that are completely alike. I was planning on making the bases astrogranite but made up my mind and chose green flock that in my opinion looks better with blue and white uniforms. 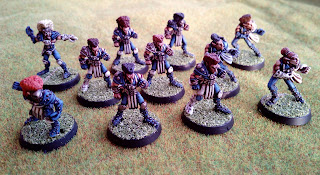 The whole team: a thrower, a blitzer, 6 linemen and 3 catchers. 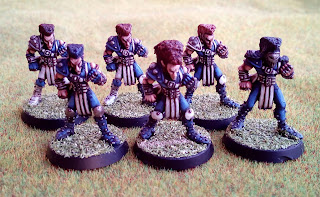 I like my elves dark haired. Here are the linemen. 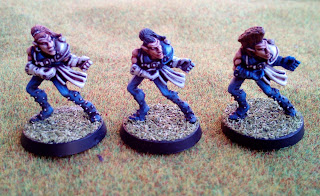 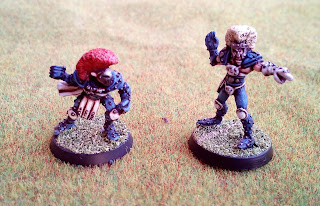 Blitzer and thrower. Not happy with the thrower´s hair.
But he´ll do for now. I have another thrower waiting to be painted.

The team is now packed and ready to come with me to Oldhammer Oulu meet where I´m hoping to get my first game of BB in many years. BTW I´m looking for 2nd blitzer model. If you happen to have one you could part with please contact me. I would prefer the short haired version to complete my collection but the mohican one will do as well.
Lähettänyt VonKortez klo 23.58 4 kommenttia:

In just under two weeks time there will be an Oldhammer meet in Oulu, northern Finland. As far as I know this is the very first meet of it´s kind to be arranged n Finland. And for that reason the goals have been kept pretty limited. It´s only on one day and for few hours. We do not have a lot of different games and don´t expect a big crowd. But everyone has to start somewhere, right?

Fantasiapelit Oulu, the local gaming store supports the happening by letting us use it´s gaming room. A BIG thank you to owners for making this possible!

The doors will open at 10 am. It will propably take an hour to set up the tables so games should be ready to start at 11 am.

All of the games we´ve prepared will be led by a GM and be joined by anyone who happens to come by. No need to take any models with you if you don´t want to. For Troll Slaying you can take a single dwarf model but you can participate even if you don´t have one.

Each scenario or round of gaming should take no longer than 1 hour.

And if you have something you would like to play please feel free to take it with you. I´m sure you´ll find an opponent here. 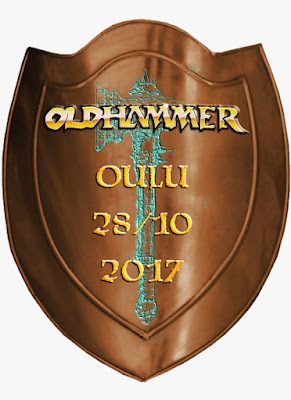 Where is he now - Berserker

One of the special troop types presented in the 3rd edition rule book is berserkers. Their descripsion says that they are units of troop that can enter a wild and uncontrollable frenzy. The berserker frenzy resebles the psychological effect frenzy but is something a bit more.

Berserkers are found in Norse armies, both in the mercenary contigent and in the WD107 published full Norse army list. The are available in both human and norse dwarf form. Chaos dwarf berserkers can be fielded as part of a chaos mercenary contingent. Chaos dwarf berserker units are also available for Khornate armies as ppesented in Slaves to Darkness. 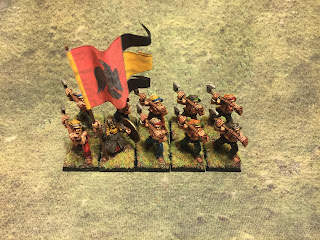 Before a battle the berserkers work themselves into a battle-fury by clashing their swords, chewing their shields and singing ´berserkers songs´. Al this will turn them into frothing homicidal maniacs with foaming mouths and glazed eyes. They will attack anyone or anything that gets in their way. Berserkers are so battle-crazed that even deadly wounds won´t necessarily stop them.


THE RULES (p. 96)
Berserkers cost an extra +5 points, added after points for equipment. A normal human berserkers is therefore worth 10 points and a norse dwarf costs you 13 points. 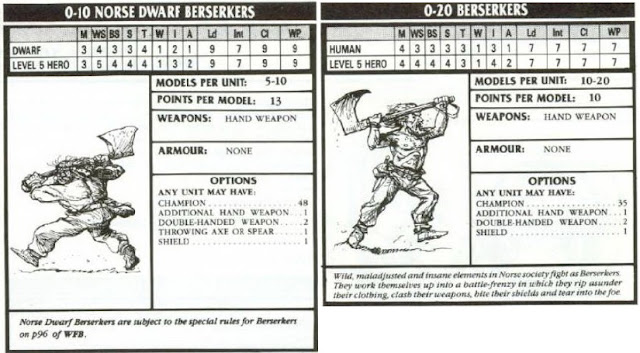 Quite logically you get a smaller number of higher quality troops, in this case norse dwarf berserkers. Being pretty tough by themselves the berserkers can do with a lvl 5 hero. In my opinion double-handed weapons are a must for berserkers. With frenzy you then get +2 to to-wound rolls and that is a lot.

On odd side is the weapons option differences. Why throwing weapons for dwarfs but not for humans?

First thing that sticks out is the missprint on human berserker profile. Numbers have shifted one column to right. Not a big deal.

But a bigger thing is the change in unit sizes!

Now the human unit size is only 5-10 and dwarf 10-20. Can´t follow the logic here. Like someone had been thinking: "The Norse dwafr berserkers are really tough - let´s let the players take a bigger unit of them to make them even tougher".

There are no seperate rules for berserker characters. I´m assuming that you can take them if you pay the extra 5 points. But I would limit their use to leading berserkers units. Just like with were characters. 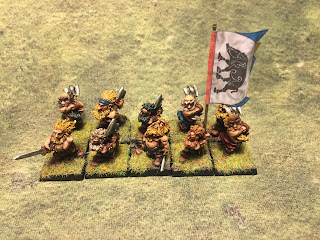 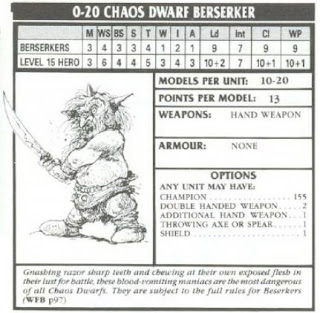 With maximum unit size of 20 models and a lvl15 hero this can be one tough unit. And a pretty expensive one too. With full unit with double handed weapons, standard and a hero costs 455 points. As mentioned before the two handed weapons is a must for chaos dwarf berserkers too. 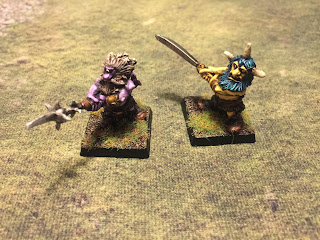 The Perry sculpted Norsemen and Norse dwarfs ranges have a couple of suitable models for berserkers. The norse dwarf slayers make perfect berserkers too. From norsemen I would choose the models with bare upper body and dynamic pose. SoL will help you out here, here, here and here.

Foundry has still in production the ex-Citadel Vikings including berserkers. You may want to check out their other viking models too.

CP models has a range of vikings including berserkers. Don´t know how these scale with old Citadel ones.

V&V miniatures too produces 28mm viking models. Their berserkers look a bit chubby for my taste but that´s propably just me.

Chaos dwarf berserkers can be found in the Citadel D3 Chaos dwarf series.

WHERE ARE BERSERKERS NOW?


Sadly the Norse as an army were left out of the 4th edition.  And with that the berserkers ceased to exist. The Norse came back with 6th edition of WFB as part of forces of chaos and new fluff was written for them. In this new setting the berserkers became devotees of Khorne which actually makes some sense. Battle-lusting warriors slipping to the dark side.

What is sad is that berserkers in my opinion became just another type of chaos warriors. Where´s the originality? If the berserkers (and all Norse) had to be turned to chaos why not make use of the tragic side of that. I´m thinking about slow degeneration. Perhaps understanding that everything has gone wrong but not being eble to do something about it. Hating oneself for the blood-lust and not being able to control it.

In the 40k there are Khorne Berzerkers described as: "Driven into battle by the frenzied need to kill, Khorne Berzerkers slaughter everything in their path and leave nothing but twitching corpses in their wake. These murderous lunatics have been ritually lobotomised to remove all trace of fear or compassion. In place of these emotions, they receive cortical implants that heighten their already fearsome aggression to psychotic levels". How original.

And in the AoS they have Vulkite Berzerkers. Google at your own responsibility.
Lähettänyt VonKortez klo 22.27 2 kommenttia: