A short while ago I spotted this TTG Tabletop Games Fantasy MP35 "Orc eating a Pie" model on ebay. And I knew I had to get him. Not because he is that good a sculpt but because he reminded me that I do not have a baggage train for my O&G army. So it was decided - he´ll be the first of the camp followers. I only need 14 more and three carts/wagons. 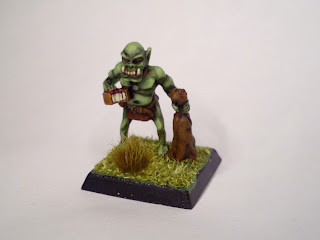 He has taken a bite alright with those bit teeth of his. 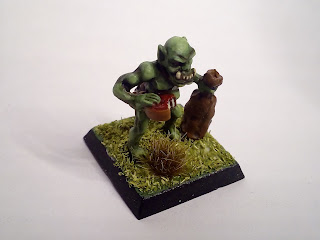 Nice raspberry glazing there on top. I think that´s a bag
he´s holding in his other hand.

I tried to make the pie look like a lemon and raspberry cheesecake. A favorite of all orcs for sure. Inspiration came from this blog.
Lähettänyt VonKortez klo 10.03 2 kommenttia:

Bought a few pre slotta goblins a couple of weeks ago from Oldhammer forums´ Trading subforum. I was mostly looking for fanatics of which I got three. Then I noticed a chaos goblin shaman and another one that looked like pretty normal goblin to me in the picture. It turned out to be a chaos goblin mutant. One of the fanatics has been seen here with my gnomes and now it´s time to present the chaos goblin duo. 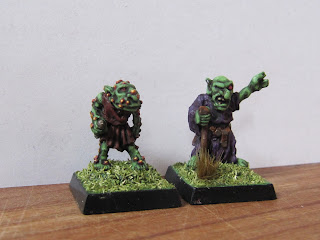 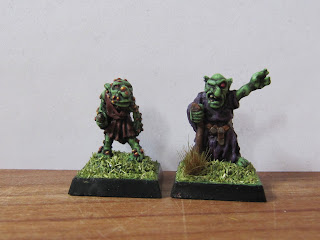 That´s a lot of warts/pimples on the gobbo. Quite a mad look on that shaman´s face. 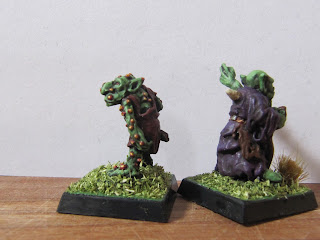 Side view of both mutants. My shaman has only one spike on his back. There is a version with three spikes too. And I´ve seen one with hand pointing straight up and with some hair of his/her head but that could have been a conversion.

Plague will fill a spot in ever groving gobbo unit. And spiky shaman gets to be... well... a shaman. Before him I had only one orc shaman and Spiky comes in very handy.