After a long break I finally got a chance to play some 3rd ed. WFB with my friends. Initially I suggested a 2000 pt game as I had just completed enough Slaaneshian chaos for that but LM suggested we´d go bigger and agreed on 4000 pt game. So eventually we had 4000 pts of Bretons facing 2000 pts of chaos and another 2000 pts of skaven. This will not be a full battle report as I don´t have all the army lists and didn´t make notes during the game. More like a picture dump and some comments on what happened there. It might be that I don´t remember all the units and details right but you´ll get the general idea on how it all went.
Pics by me and LM. 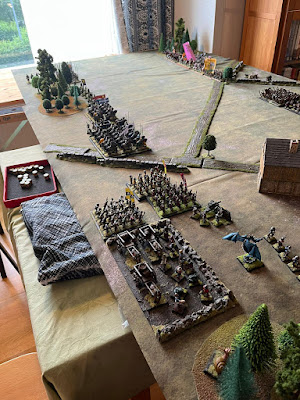 General view of the battle field from Breton side of table. On Broten right flank you can see some skirmishing crossbow men and a bound dragon behind them. Then a cannon and three blocks of infantry next to them. The baggage with wagons and camp followers sits behind the right flank troops. 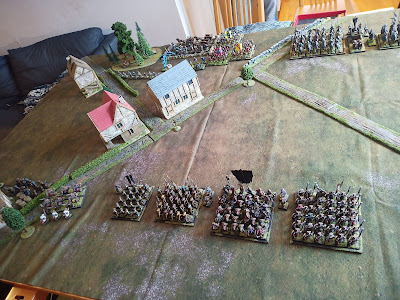 Facing the Bretons on this flank are most of the skavens. Far left are two units of skirmishers and three beastmasters with six rat ogres. Infantry blocks from left to right are stromvermins, clan rats, more clan rats and slaves. Between the blocks there are two warp fire throwers and a couple of poison wind globadiers. Two jezzails are just out of picture to the right. Across the field there a large unit of knights, war altar, mounted wizard and another smaller unit of crack elite knights. 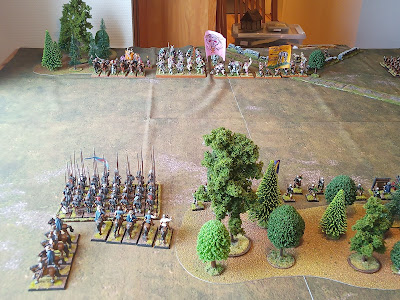 Breton left. To the right, next to elite knights stands a cannon. I the treeline there´s skirmishing archers. The far left is made up of two units of mounted crossbow men and a big block of pike armed mercenaries. They face the chaos component of the evil coalition. 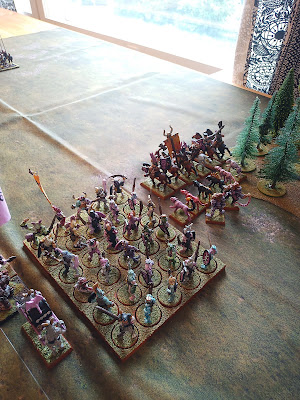 Top right are six mounted chaos thugs with six chaos hounds and their two beastmasters behind them. The main body of chaos contingent is a 30 strong unit of beastmen led by a lvl20 hero. At bottom left corner there the chaos war alter and it´s guards. In front of them stand six minotaurs including chaos general. The last chaos bits are a unit of 12 arrer thugs and a chaos sorcerer just of of picture to the left. 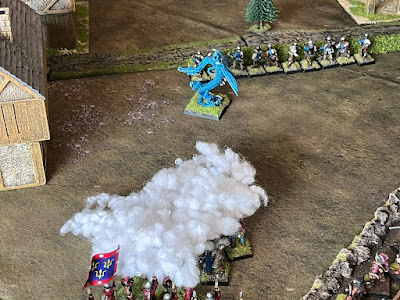 Some spells were cast before the first turn by both sides. A magical mist appeared on Breton right flank cannon and on the two skaven jezzails too. The mist engulfing the Breton cannon prevented the infantry block from moving causing a big traffick jam that would have a big effect on battle. 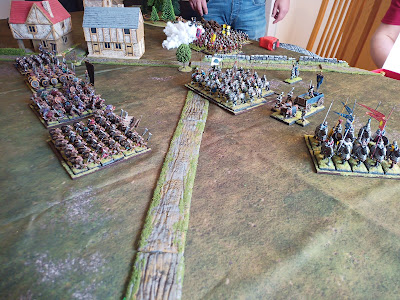 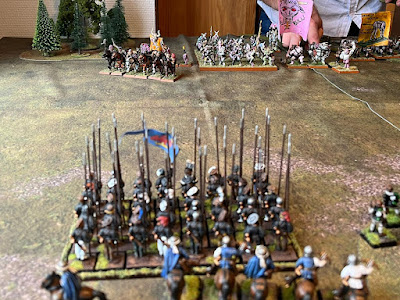 In the first turn pretty much everyone on both sides moved forward looking for opportunity to make the first charges. The was some missile fire in which a coupe of knights were killed and eventually three minotaurs too. They were forced to test for panic but general´s LD10 held. 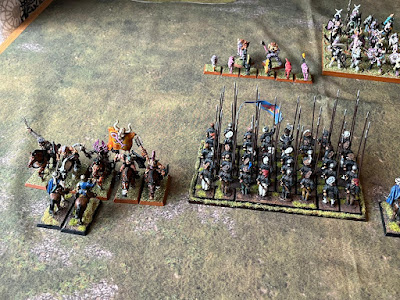 First close combat erupted in the flank where light cavalry clashed. Humans were no match for mounted chaos thugs who despite losing one of their number to missile fire routed their opponets. Panic spread and while pike mercenaries held the other light cavalry unit lost their nerve and left the battle field. Threatened from multiple sides now it started to look grim for mercs. 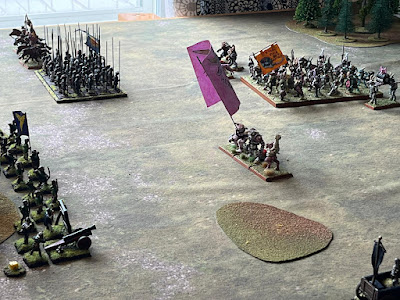 Advancing in the middle was the minotaur general and his now diminished retinue. The Breton elite knights had carefully positioned themselves to charge the minotaurs next turn. Little did they know that the chaos sorcerer had an ace up his/her sleeves. A magical bog appeared in the knights´ position and they were lost until they could find their way back (roll D6 each magic turn. 1-4 remains lost, 5 opponent places unit back on field, 6 player places unit back). Suddenly the minotaurs seemed to be awfully close to that cannon and those archers. 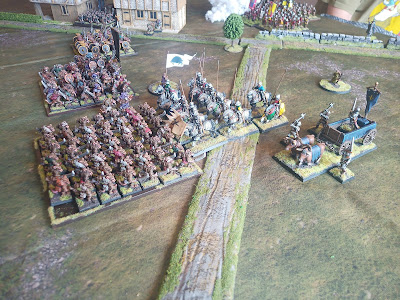 On the skaven side of the table Bretons knights had charged the skaven slaves. Some blague cencer bearers were released but they failed to cause serioues damage. Slaves died in droves but their big numbers meant that they didn´t have to test for rout yet even if they lost the combat and were pushed back. The knight would need to take care of them fast as other skaven units were moving in to help their brethren. 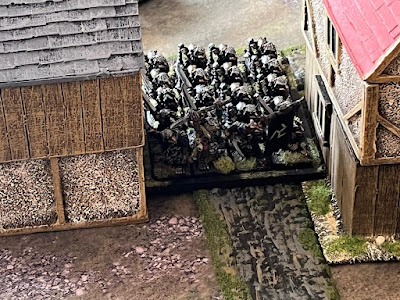 Stormvermin were pushing towards Breton right flank. This was made possible by the fact that the magically bound dragon was there no more. The skave seer had raised an undead hero that charged to dragon. Against all odds the dragon lost it´s nerve and headed for home. All that stood between stormvermin and the Breton baggage was some skirmishers now. Still the magic mist hindered Breton movement and prevented the infantry from coming to help. 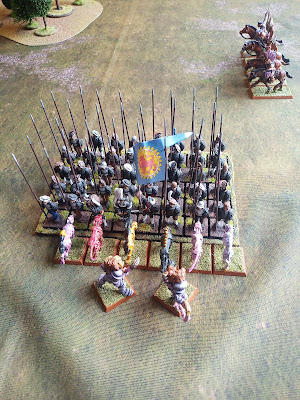 Mercenary pikemen got their hand on the chaos hounds. That suited the chaos general well as they were now engaged and could not threaten the beastmen advancing towards middle of the field. Mounted thugs can be seen manouvering in the back. 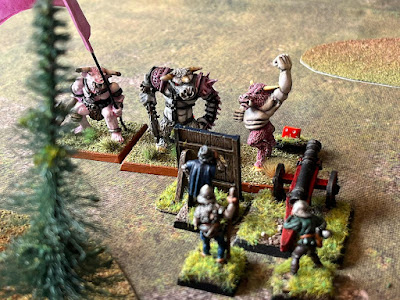 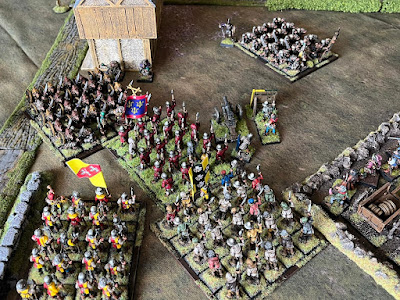 Meanwhile the magic mist had dissipated but the skaven were there and Broton infantry was hard pressed. Camp follewers nervously cluthed their improvised weapons as they anticipated stormvermin charge. 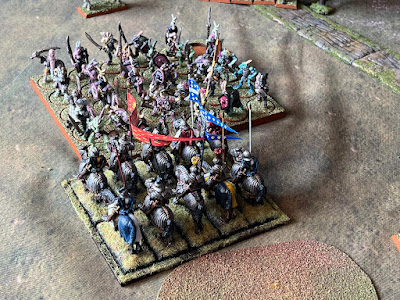 The elite knights found their way out of the magic bog and got into a melee with beastmen. Perhaps they could save the day for the Bretons... 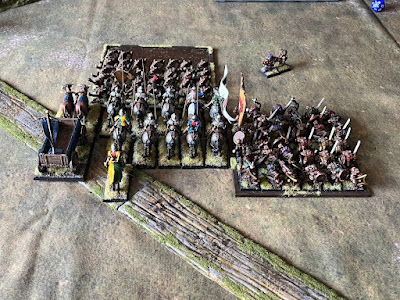 But it was not to be. Skaven slaves managed to hold their nerve and when clan rats flanked the knights it was all over. Their routed and with the Bretons having lost more than half of their initial points value we called it a day. At this point the Breton war altar was running amok. Having been shot at with jezzails the altar guards had been thrown overboard and killed. With some luck the altar wagon ended up crashing into skaven slaves.
Magic played very crucial part in this game. Magic mist kept one of the Breton cannons silent and caused the huge infantry traffinc jam that prevented them from affecing the battle outcome. Magical bog took out the best Breton unit just as they could have engaged the minotaurs and were lost long enought that it was all over when they got back.
There was some good luck for evil guys too. Skaven slaves rolled 4 the one time they had to test for panic and passed. Despite being hit by cannon the minotaur general suffered just one wound. Panic spreading to second light cavalry unit in the early game helped chaos a lot on that flank. And so on. 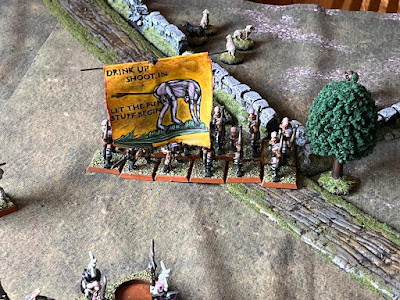 Good Job Thugs! Not killing anyone, not loosing anyone. Shoud have advanced with them to be able to shoot at the cannon crew. They did however provide cover for the chaos wizard for couple of turns. 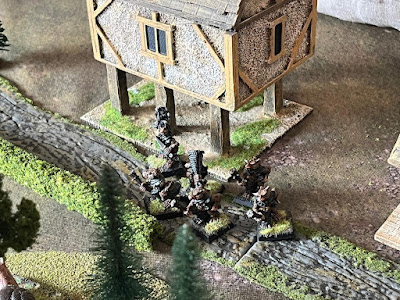 Some gutter runners sneaking up on the skaven left flank. They might have been in big trouble had the dragon stayed and not fled. 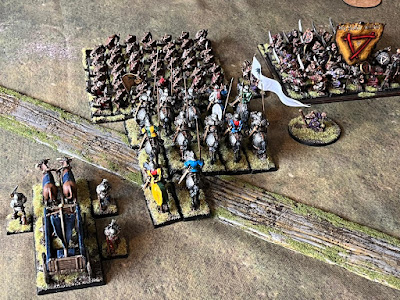 A moment before the war altar was hit causing the animals to run amok and charge into skaven slaves. Only one altar guard survived initially but he was later killed by the chaos sorcerer in melee.
All in all it was three turns and roughly four hours of fun. Hoping to play again soon!